Leader of the Wild Bunch

Tuxedo Blowing in the Wind

Lucky Roulette is the leader of the Wild Bunch. He is the main antagonist in Tuxedo Blowing in the Wind.

Lucky Roulette is a tall muscular man with orange hair and dark skin. He wears square metal earrings, a red tied shirt under a white vest with white chaps and boots. His vest sports a "777" insignia on the back as a nod to his name "Lucky Roulette."

His style seems to be a mixture of 70's disco and wild west cowboy.

Lucky Roulette and his gang had been attacking Evergreen for a while before Van showed up. Prior to his arrival, Lucky Roulette had kidnapped Michael Garret and sold him to The Claw. [1]

Tuxedo Blowing in the Wind: Lucky Roulette leads his gang, the Wild Bunch in an attack on Evergreen. According to the Mayor, the Wild Bunch has been attacking them for two months.

Lucky Roulette arrives as Wendy and the Mayor are trying to convince Van to protect their town. He threatens to unleash his armor on the town if they don't surrender their vault before the end of the next day.

Later, Van stumbles into a saloon and comes across Lucky Roulette who challenges him to a game of cards. During the game, Van learns that Lucky Roulette dedicates himself to luck as it's the only thing that can't be learnt. He also makes a promise that if Van wins, he will let Van leave the saloon unharmed and that he never shoots a man in the back.

Van loses the card game and is beaten up by Lucky's gang and thrown out of the saloon.

Lucky then shoots Van down in a back alley.

The next day Lucky commences his attack on Evergreen. Wendy confronts him only to be grabbed by Lucky and forced to watch as the town is destroyed.

Lucky is then shocked to see Van alive and well, and responds by piloting his armor.

His armor proves little match for Van's who destroys it with Dann and captures Lucky as the Wild Bunch retreat.

Wendy and Van then interrogate Lucky about her brother Michael. Lucky tells her that he and his gang sold Micheal to a man with a claw for a hand. Enraged, Van demands to know where the Claw went but Lucky doesn't know. Wendy calms Van down and he drops Lucky, who is left without his armor and his gang. [2]

The Claw would later regret using "such a violent man" to acquire Michael for his plan.[3]

As his name would suggest, Lucky Roulette is obsessed with being lucky. He loves to gamble, attempting to shoot himself before any action with his two guns, akin to Russian Roulette. He gambles with Van in a card game, claiming that luck is the one thing that nobody can learn.

He is also shown to be a merciless thug, attacking the people of Evergreen to claim their resources for himself.

His true nature however, is shown to be somewhat cowardly and also a fake. He shoots Van in the back despite saying he only shoots people when he's looking them in the eyes.

Lucky Roulette on his Roulette wheel

Lucly Roulette at the saloon 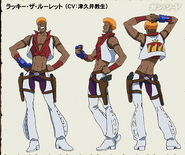 Retrieved from "https://gunsword.fandom.com/wiki/Lucky_Roulette?oldid=7437"
Community content is available under CC-BY-SA unless otherwise noted.