"Yes, all life will share the same vision as our Comrade! What a wonderful Universe it will be!" - Fasalina in her hope for the Time of Happiness

Fasalina is a beautiful woman with long black hair and yellow eyes. She wears a purple uniform consisting of a low-cut long sleeved robe and white thigh high boots.

Her uniform shares similarities with her Comrades as part of The Original Seven.

Before joining The Original Seven, Fasalina worked as a prostitute which she found degrading. She is recruited by The Claw, who promises her "tainted" body will be restored upon his plan being completed.

The Claw seemed to trust Fasalina greatly, as she performs numerous tasks for him during the series. She is instrumental in cultivating the flowers needed for his Birthday System, using Hayetah and the town of Trinolia as a farm of sorts. She also acquires important metallic fibers from Catherine Nakata, from the Kingdom of Bokini. This is where her rivalry with Carmen 99 begins, with Carmen resenting her for using Hayetah and her home town for The Claw's plans.

She develops a romantic relationship with Michael and helps mold him into the armor rider necessary to control Saudade of Sunday, which was a pivotal part of The Claw's plan.

When the Claw is killed by Van, and the former prostitute is defeated by Carmen in their own final showdown, Fasalina begs for Carmen to kill her, after losing all of her will to live. She is later reunited with Michael only to seemingly perish with him when a boulder lands on top of them. Whether or not they had survived is in question, since they are never seen afterward.

When battling in her Armor, Fasalina often taunts her opponents by being very flirtatious, thereby bringing them out of focus. She also pole dances with her staff to control her Armor.

When not fighting inside her armor, she uses a staff which can extend, bend or contract at her will. She was able to defend her Comrade from Ray's attack using her staff and it's range to swat him away. She could perform acrobatic maneuvers with her staff, making her a powerful opponent.

Outwardly calm and serene, Fasalina is shows a great passion for her Comrade's dream. She herself desires to be cleansed of her past, and takes comfort in The Original Seven almost like a surrogate family. She enjoyed the thrill of riding armors, facing Van and enjoying their battle immensely. 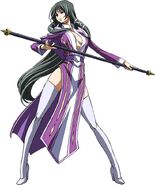 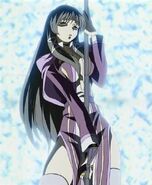 Add a photo to this gallery

Retrieved from "https://gunsword.fandom.com/wiki/Fasalina?oldid=6328"
Community content is available under CC-BY-SA unless otherwise noted.