The El Dorado Five are a team of Armor riders who utilize a custom-made Armor, El Dora V.

Nero: Nero is a somewhat stocky man with maroon colored hair and Blue eyes. His main color scheme is maroon which is the color of his El Dora V uniform.

Jose: Jose is a tall slender man with grey hair, usually tied into a ponytail. His color scheme is blue.

Barrio: The tallest of the bunch, Barrio's color scheme is orange.

Carlos: The smallest of the team, often found sleeping. He wears a green uniform.

Chizuru: The fifth member and only female in the group. She was a pretty woman in her youth, resembling her granddaughter Yukiko. She wore a pink uniform and piloted the "Pink Amigo."

The El Dorado Five consist of four aging but boisterous Armor pilots, Nero, Josè, Carlos, and Barrio. They spend their days reminiscing about past battles, which annoys the rest of their town to no end (because they believe they are making it all up for attention), fueled by their great liking for alcohol. The fifth member, Chizuru, has already died. Each of their animal-themed Armors can unite into a one gigantic mecha (Legs, Torso, Head and Shoulders, Arms, Backpack) called El Dorado Five, which possess great strength and power. The inn they frequently visit is managed by Yukiko, Chizuru's granddaughter.

Van and Wendy first meet them in their home town boasting about their deeds as armor pilots. When the town is attacked by a scientist who feels himself neglected by the town community, they arrive on the scene, but are incomplete since only four of the armors are connected together. Van remedies this, after a scathing comment, by taking Chizuru's Armor and hurling it at their armor where it connects and finally unites it into the El Dora Five for the first time in many years and defeat the villain. After this incident, their respect in the eyes of the town youngsters rises considerably. Later they also join Van's company to defeat the Claw and save the world, claiming that not many people get the opportunity to do so. After they help Van and Dann blast off into space to regenerate, they claim that Van is their "student" and that they would name him El Dora Dann.

A comic trait is that Carlos is nearly always asleep, even when the group is engaged in the most ferocious battles. He does, however, wake up occasionally, and provides good advice when he does. During the final battle, their Armor is seriously damaged and the power fails. Carlos then wakes up completely, as the others admit defeat, and activates a backup power system before leading the last attack on Birthday's defenses, and helping Van get the finishing blow.

Their "secret base", stereotypical speech, distinct characteristics (Nero as the hot-blooded main pilot; Jose as the cool rival and foil to Nero; Barrio as the 'big guy'; Carlos possibly as the pint-sized genius technician; and Yukiko as the token girl) uniting mecha and colorful costumes are a loving homage of super robot and Super Sentai team shows. Their final form is an homage to GaoGaiGar.

When they defeat an enemy, they turn their back on their opponent, pose, and yell out "ADIOS, AMIGO!!!"

Nero: Nero can sometimes be a bit boisterous, often getting into arguments with Jose and others. He has a big heart but can be loud and obnoxious, especially when he drinks. Deep down though he cares for his team, Yukiko and the others and fights for justice.

Jose: The most nonchalont of the group, Jose sometimes seems a bit cold and is quick to call Nero out on his boasts. He too can get argumentative when he drinks but always falls back especially if Yukiko steps in.

Barrio: Perhaps the calmest of the El Dorado Five, Barrio is usually seen reading a book and generally avoids getting into conflicts. He respects Yukiko and will often wrangle Nero and Jose when they are being out of line.

Carlos: Carlos is always with the group but is almost always asleep. He is something akin to a secret weapon and usually awakens to provide moral support and back up to his team mates.

A photo of the El Dorado V during their youth.

The group eats with Van in Gloria 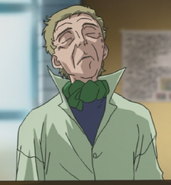 Ending Credit
Add a photo to this gallery

Retrieved from "https://gunsword.fandom.com/wiki/El_Dorado_Five?oldid=5855"
Community content is available under CC-BY-SA unless otherwise noted.